Originating from Cape Town, South Africa, André has worked extensively in Europe, Africa and now Australia over the last 30 years.

Employed by the Federal Group for the last 15 years, originally as Executive Chef at The Henry Jones Art Hotel and now at Wrest Point Hotel and Casino where André oversees a brigade of 70.

André prides himself on investing his time in mentoring young chefs, teaching the next generation of top Tasmanian chefs.

André was recently selected to represent Tasmania  in Shanghai, cooking at the Savour China Gala dinner at the Peninsula Hotel Shanghai. 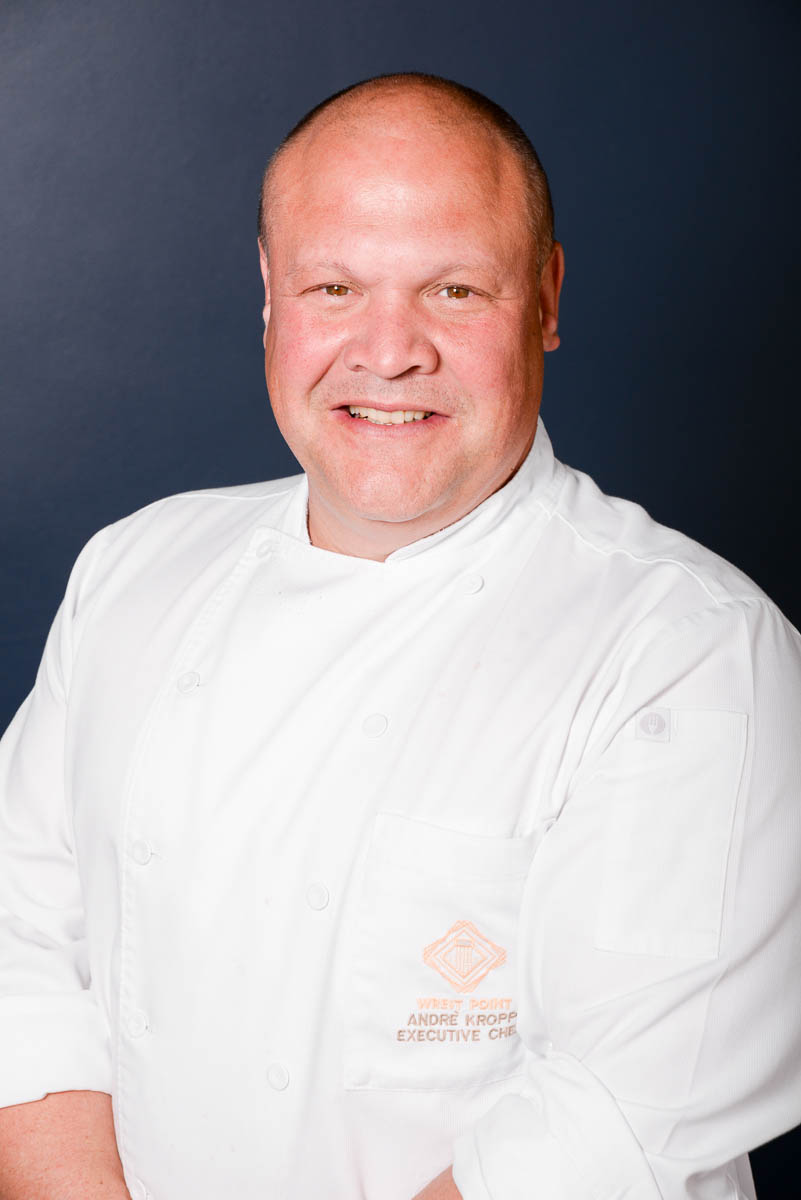 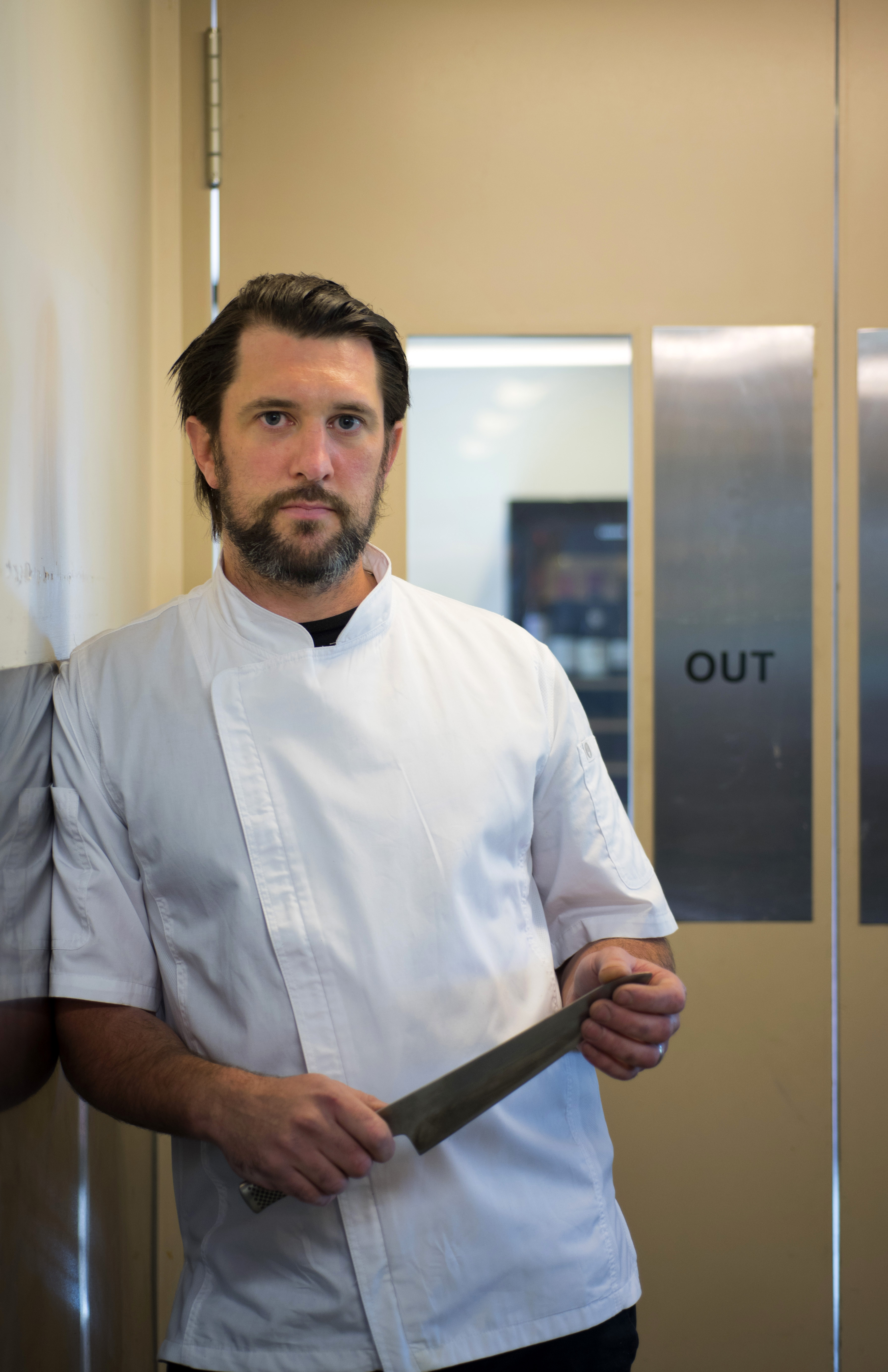 Originally from New Zealand, Nick made the early career move to Sydney to learn the trade at the renowned 'Restaurant Forty One'. After stints in upmarket eateries 'Otto' and 'Coast', Nick spent time in London at the exclusive 'Cuckoo Club', working with some of London’s emerging talents.

Before returning to the southern hemisphere, Nick was a personal chef for the Royals of Oman, cooking for HRH the Queen, along with other Royals and political leaders.  Returning to Sydney in 2009, Nick led the kitchens at 'Public Dining Room', 'Steel' and 'La Scala', cooking a full spectrum of cuisine styles from modern gastronomy, to charcoal and wood-grill cookery as well as classic Italian.

Starting with Josef Chromy Wines in 2016, Nick has developed a love for the ease of access to arguably the freshest, highest quality food available in Australia, right on his doorstep! With a love for the simple and pure cooking of each ingredient, Nick builds dishes into something special and unique to the surrounds of the kitchen.

The strongest influences on Nick's career have been in French and Italian cuisine.  His inspiration lies in the simplicity and care for each individual ingredient that comes with Italian cooking, paired with the balance and technique that is the basis of French kitchens.

Bringing these techniques into modern Tasmanian cuisine provides an exciting and exploratory phase to Nick’s journey as a Chef.

Born and raised in Johannesburg, John exudes a passion for his kitchen with a Ramsey-esque vibe but without the temper. He is deeply passionate about seasonal produce and making sustainable choices in all areas of the hospitality business. John thinks methodically through each part of his supply chain, knowing it’s not only the way we select the produce but understanding how its packaged and delivered to the restaurant that makes all the difference.

These traits stem from a life growing up in apartheid South Africa where food scarcity was an everyday event and wastage was a crime. John started cooking for his family from a young age, when his dad was travelling for work, leaving John to grow up early and take control of the household cooking. His dad's work also gave John the opportunity to travel throughout regions most kids had never heard of and his culinary interest was piqued.

After a stint at hospitality school in SA, John moved to England to start a role in a commercial kitchen which would see him undertake a range of roles under a Chef who was focused on Sustainable and organic produce. Back in 2001 this was a relatively new area and the work they did saw then cooking  at Highgrove Estate for all of Prince Charles events.

Following this John took off to Cyprus and ventured into the inter-continental hotel group. This role over the next 10 years would teach him enviable lessons in business.

John immigrated to Australia with his family in 2013 and now lives with his two boys, the oldest of the two can be found back of house washing up during a dinner service.

The Lounge by Frogmore Creeks menu, as with the Restaurant at the winery, heroes the land, sea and garden with dishes that pay tribute to the beautiful produce of Tasmania and the diversity of kitchens around the world.

This menu style blends so well with John’s experience and history, creating exciting and delicious dishes for The Lounge menus. 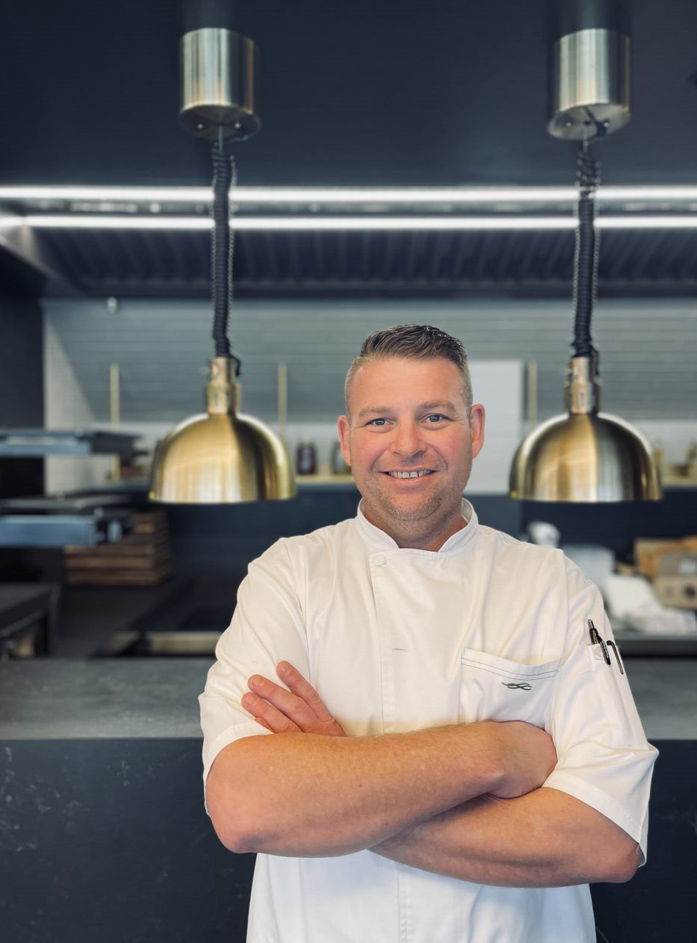 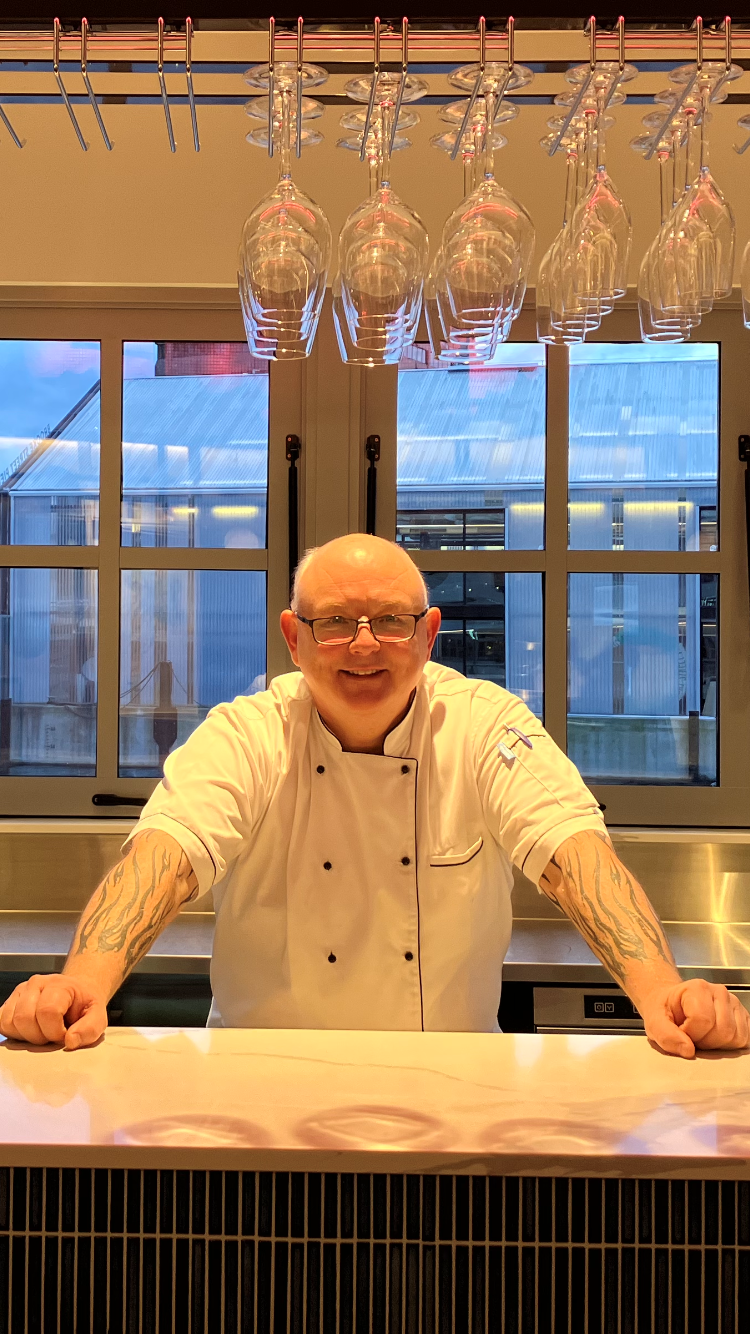 Born in Tasmania before moving to South Australia, Shayne started his career at the Coalyard Restaurant in Adelaide some 36 years ago. Shayne has had wide and varied experience across restaurants, hotels and cafes, having recently joined the team at the newly created and exciting space at Franklin Wharf.

From an early age, food was a big part of Shayne’s life, starting with work in butcher shops after school and weekends, learning the fine art of butchery and knife skills.

Until recently Shayne owned the award-winning Lean-To Kitchen Tasmania, keeping him busy with the art of food manufacturing and catering for over 15 years, while also keeping his hand in kitchens and his eye on food trends.

Shayne has taken opportunities to highlight Tasmanian products while private catering for Rotorlift Aviation, serving delicious meals for celebrities such as Elton John and other VIPs from interstate and overseas.

One of Shayne’s most memorable moments was having the privilege of catering for the Australian and English crickets teams while they competed in the first Ashes Test ever held in Hobart.  As leader of the catering team for multiple international events, developing and delivering menus to suit teams from all over the world was an exciting challenge he met head on!

Shayne proudly promotes the use of local Tasmanian ingredients and producers, and has a passionate approach to reducing food wastage while supporting local food charities.

Unfortunately Ainstie is no longer able to join us at Variety of Chefs, as she is recovering from Long Covid. We hope to see Ainstie at a Variety of Chefs in the near future.
__

Ainstie has been the Executive Chef at Government House for several years with her first stint starting in that position in 1987 as the first female Executive Chef and the youngest at 24. She has left a few times to explore other work and to refresh her skills.

This is her fourth time back to Government House working in the same capacity but this time it also involves being a driver behind the new community engagement program.

This program includes student work placements, day programmes for veterans, and teacher development and working with students from all schools learning plate to table harvesting and preparing of produce.

She is involved with lots of community fundraisers and information sessions with community groups, and numerous school kitchens preparing and serving the food the students have grown and preparing meals for large charity functions. She is a previous member of the Rotary Club of Salamanca and is past president of the club where she also served on the board for three years.

Currently Ainstie is in to her second term and is Vice-President on the board of Eat Well Tasmania.

Ainstie is a strong and ardent supporter of small, local produce suppliers and she constantly promotes and advocates the importance and benefits of eating their food.

She is also deeply interested in making Tasmanian local produce accessible and affordable to all families. 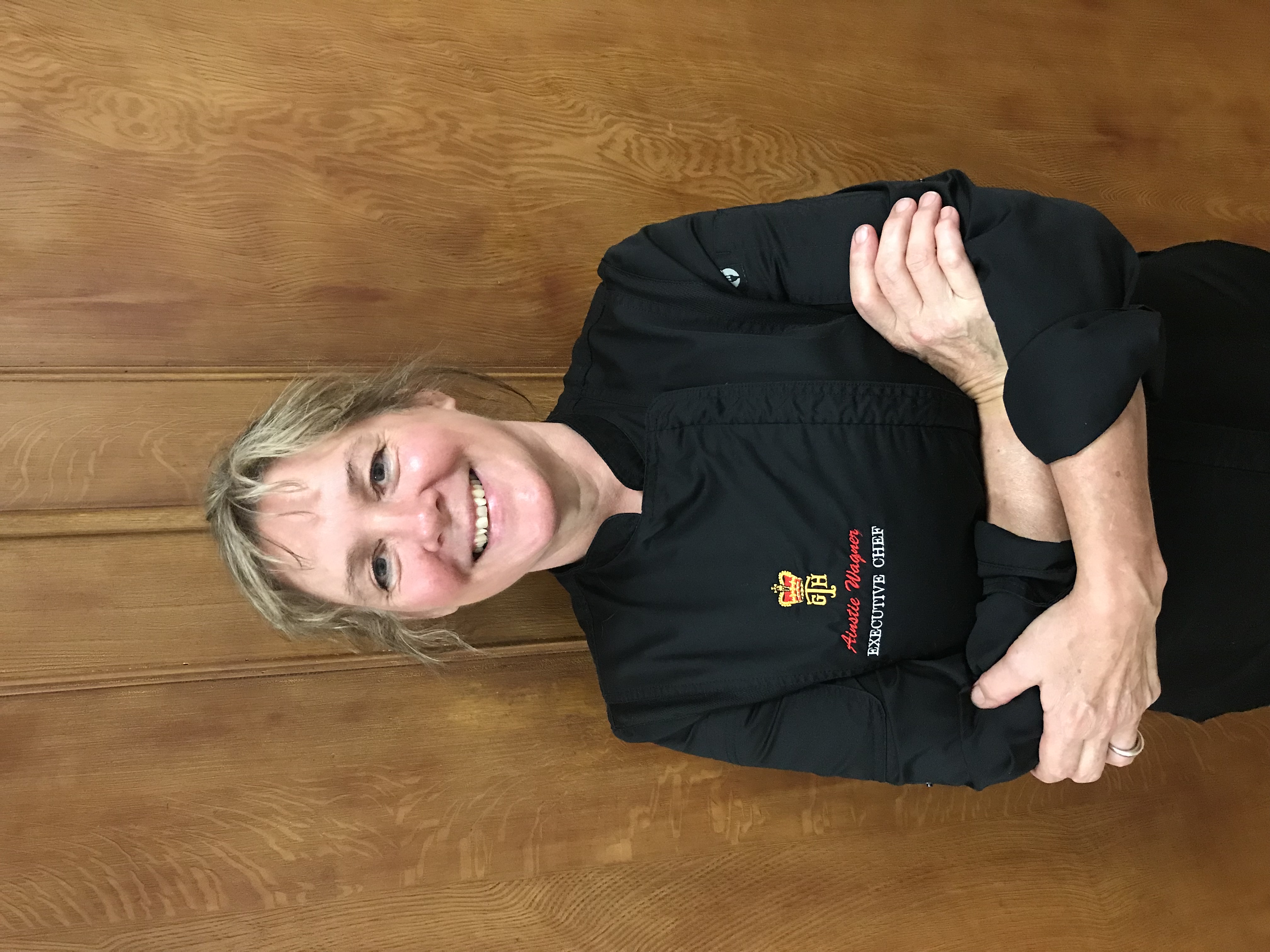